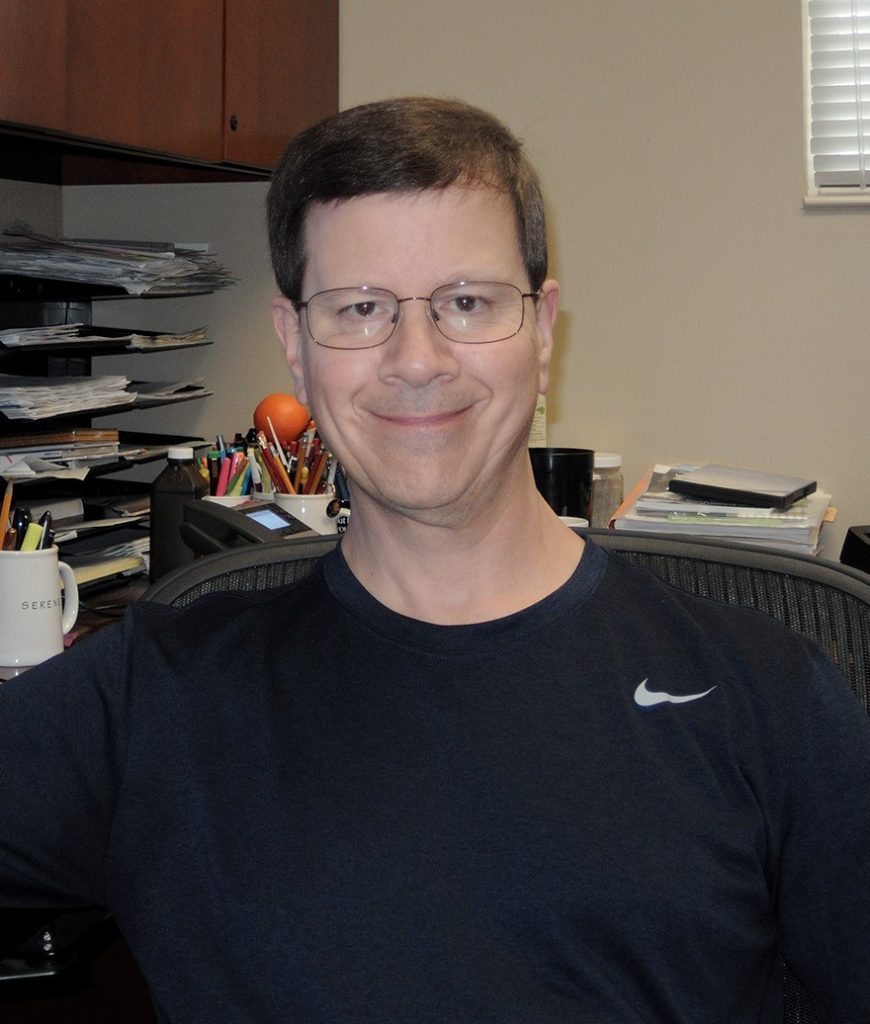 It is with deep regret that our department lost a friend, beloved faculty colleague and mentor to many students, Dr. Stevan Marcus, in January 2018 at the age of 56.

Steve earned his B.S. in Microbiology, as well as his Ph.D. in Cellular, Molecular, and Developmental Biology from the University of Tennessee.  A native of the rural East Tennessee, Steve always viewed his time in Knoxville as the formative experience of his lifetime.  It was there, in the lab of his treasured doctoral mentor, Dr. Jeff Becker, that he first learned the joy of discovery as an undergraduate and where he blossomed into an outstanding young scientist known for his meticulous writing and lucid presentations.  His success at Tennessee positioned him for a fellowship at the prestigious Cold Spring Harbor Laboratory on Long Island, where he was a postdoctoral fellow in the lab of Dr. Michael Wigler, a world-renowned cancer researcher.  Steve’s groundbreaking research with Dr. Wigler on the prevalent oncogene, Ras, led to an independent faculty appointment at the M.D. Anderson Cancer Center in Houston, where for the next 12 years, he established himself as an international leader in basic research pertaining to cell division, cellular stress response, and cancer.

Despite his successes, Steve felt something was missing in his career, as he genuinely yearned for an opportunity to share his research and mentorship with young people – and the type of students that he was once himself – at a major research university in the South. Thus, it was no accident that he accepted an offer to move to UA in 2006 as a tenured Associate Professor, since this was also where two of his close friends from graduate school, Professors Guy and Kim Caldwell, had established their own academic careers in our department under the leadership of then Chair of Biological Sciences, Dr. Martha Powell.  Steve rapidly acclimated to UA and served the Department in a variety of capacities ranging from Chair of the Graduate Committee and teaching Honors Biology for freshmen, to running the Howard Hughes Medical Institute-sponsored undergraduate research program for several summers.

Steve was the recipient of multiple grants from the National Institutes of Health to support his research, as well as other funding from UA, the State of Texas, and private foundations.  His research was always considered of the utmost caliber and appeared in the high-profile journals including Molecular Cell, The Journal of Biological Chemistry, and the Proceedings of the National Academy of Sciences (7-times).  While at UA, and in collaboration with Dr. Jordan Gutterman of M.D. Anderson, he was granted a patent on a novel therapeutic molecule for cancer treatment. Steve took great pride in preparing students to pursue and attain their professional goals.  His former students include numerous recipients of research awards and went on to obtain either their M.D. or Ph.D., as well as faculty positions and/or jobs at Harvard, the University of Pennsylvania, Johns Hopkins, the University of Georgia, UAB, Tulane, Berkeley, Yale, as well as in the pharmaceutical industry.

Outside of the office and lab, Steve was an avid weight-lifter, an excellent amateur photographer, and he enjoyed a wide variety of music and sports; he was especially a big fan of the Boston Celtics and New York Yankees. Steve was also great admirer of the U.S. National Park system, where he and his family routinely vacationed.  Most significantly, through a partnership of 29 years with his wife, Karen, he shared in his greatest pride and joy – their brilliant and beautiful boys, Stevan T. and Wesley.

Dr. Stevan Marcus leaves behind a legacy of exceptional professional accomplishment, mentorship, and a well-earned reputation as a rigorous scientist and respected educator.  Those who knew him well will always remember that Steve was someone who had a smile for everyone and will miss his fun-loving spirit. He truly had a childlike fascination with living things – the beauty of form and function that exists only in nature – and persists through evolution.  An explorer at heart, Steve dedicated his life to discovery – and education of the next generation of explorers.

As a fitting tribute to his legacy, we respectfully ask interested parties to please contribute to the Marcus Memorial Undergraduate Research Fund that has been established in his honor by his family and friends in the UA Department of Biological Sciences.