We are proud of the contributions our alumni make to science and society. We would like to keep up with graduates from the Department of Biological Sciences, just to find out where you are and what you’re doing. Please consider sharing your information with us using this form. You can also provide news about yourself that we will publish on our website.

Amber Foster Emerson (B.S. 2012) is a UA BSC graduate who also earned a a Master’s Degree in Secondary Education – General Science from UA in 2016. As a graduate student she was awarded

the William H. Mason Fellowship. Amber is now a science teacher at Westlawn Middle School and was recently named the 2019 Outstanding Alabama Middle School Science Teacher by the Alabama Science Teachers Association. The honor recognizes and awards teachers, district directors, industries and other individuals who have demonstrated outstanding qualities and contributions to science education in Alabama annually. She has also been named a Tuscaloosa City Schools Educator Ambassador. (2/20) 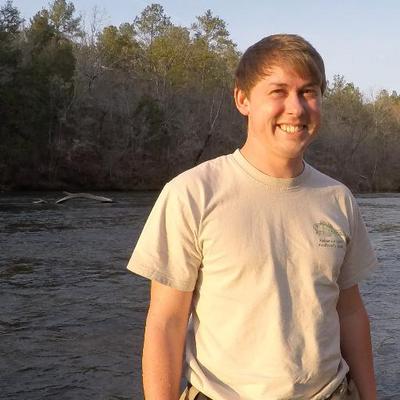 Nathan Whelan (Ph.D. 2013)  is currently the Director of the U.S. Fish and Wildlife Service Southeast Conservation Genetics Lab. He also has a dual-appointment as an assistant professor at Auburn University in the School of Fisheries, Aquaculture, and Aquatic Sciences. Since graduating with a Ph.D. in 2013, Nathan has published on topics ranging from the evolution of comb jellies and theoretical phylogenetics to freshwater snail taxonomy and conservation genetics. As of 1/2020, Nathan’s lab currently consists of a postdoctoral research fellow, a first-year Ph.D. student, and a lab technician. The Whelan lab’s research focuses on aquatic species biodiversity and conservation, and they also provide genetic program evaluation to numerous national fish hatcheries in the southeastern United States. (1/20)

Lauren Harper (B.S. 2019) is working as a clinical research assistant at UNC Chapel Hill studying fecal microbiota transplantation (FMT) and its use in the treatment of severe and enduring anorexia nervosa. She is also conducting other hormonal and eating disorder resarch projects with the department of psychiatry. (1/20)

Jason Chesser (B.S. 2006) has just completed his Ph.D. in the Department of Biology at the University of Mississippi. Jason was an undergraduate researcher in the Rissler Lab during his undergraduate days. (5/10)

Dr. J. Whitfield Gibbons (B.S. 1961, M.S. 1963) was awarded the Clarence E. Watson award by the Southeastern Association of Fish and Wildlife Agencies. Dr. Gibbons is Senior Research Ecologist at the Savannah River Ecology Lab and Professor of Ecology at the University of Georgia. (5/10)

Dr. James D. Williams (Ph.D. 1969) has published “Freshwater Mussels of Alabama and the Mobile Basin in Georgia, Mississippi and Tennessee.” Dr. Williams is a Research Associate in the Florida Museum of Natural History, Gainesville, Florida. (4/09)

Dr. Lawrence Davenport (M.S. 1978, Ph.D. 1983) Professor of Biological and Environmental Science at Samford University, was named the 2007 Alabama Professor of the Year by the Council for Advancement and Support of Education and the Carnegie Foundation for the Advancement of Teaching. (5/08)