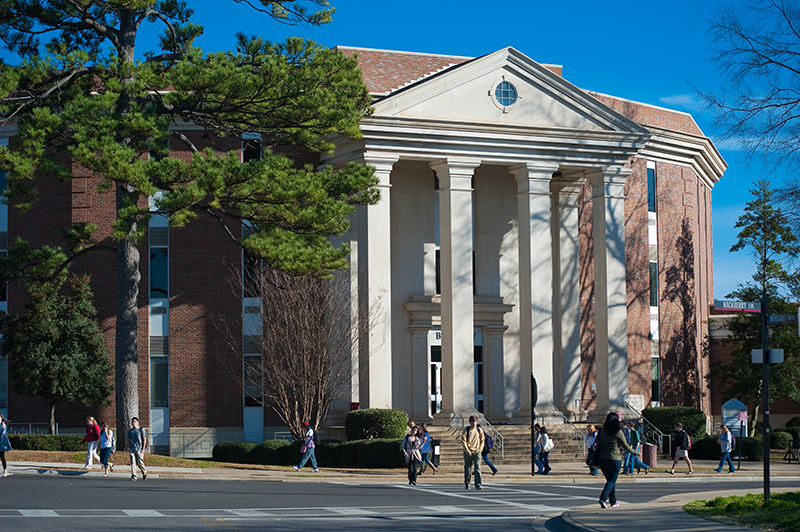 During the fall 2019 semester, all remaining residents were relocated so you could undergo a much-needed renovation because, through the years, you have become worn down. However, for many years you were the main hub of our department. We staffed our office, educated our students, and performed research, all within your sturdy polygonal structure. Thus, we thank you, Biology Building, for serving us well. In your honor, we, the former occupants, reflect back on some good and funny times…

My memories of the building will forever be associated with water, lots and lots of water. There was the day when the air conditioner drip pan in the ceiling overflowed, forming a waterfall just outside the door to the scanning electron microscope. This led then-department chair Bill Darden to ask if he needed to buy umbrellas for equipment! We may have been the only optical analysis facility in the country with a wet-dry vac as an indispensable piece of equipment. There is also my memory of the morning I came to my 4th floor research lab only to find that one of the ceiling tiles had collapsed on top of my compound microscope due to the previous night’s rainstorm. Finally, who can forget the flood all over the second floor, near the teaching labs, when a student pulled the cord to an emergency shower in the hall? Of course, the old Biology Building was designed without drains!

Rain-induced floods, old air conditioning ducts and emergency shower episodes were not the only sources of H2O. Professor Gordon Ultsch and his students regularly forgot that they were filling turtle tanks up on the 4th floor. Unfortunately, my PCR machines AND the designated isotope portion of my 3rd floor lab were directly below. I decided after the second such turtle-flood to move both to a safer location!

I was teaching an 8 a.m. Principles of Biology class in the subterranean auditorium attached to the Biology Building on a Monday morning after a fierce weekend of non-stop rain. Apparently, the flooding rains displaced a family of field mice from their home and they took up residence under the auditorium podium. About 15 minutes into my class, they got scared, shot out from under the podium and startled the humans. I think the humans also startled them, especially once mass screaming began. The mice panicked and headed up the aisles for the top-back of the auditorium at breakneck speeds. This caused an immediate reaction as 300 students began jumping on top of their seats, clutching their backpacks. However, as this chaotic scene unraveled in front of me, there was one individual who was chill. “Sparky,” a service dog, was simply laying in the aisle and paying no attention to the mice. I found his demeanor, in the middle of the frenzy, to be a calming influence, and I was thus inspired to retake control of the classroom. Since mice can travel at speeds of 12 feet per second, they left almost as quickly as they came, so we shook off the morning surprise and continued with our lecture on cellular respiration. 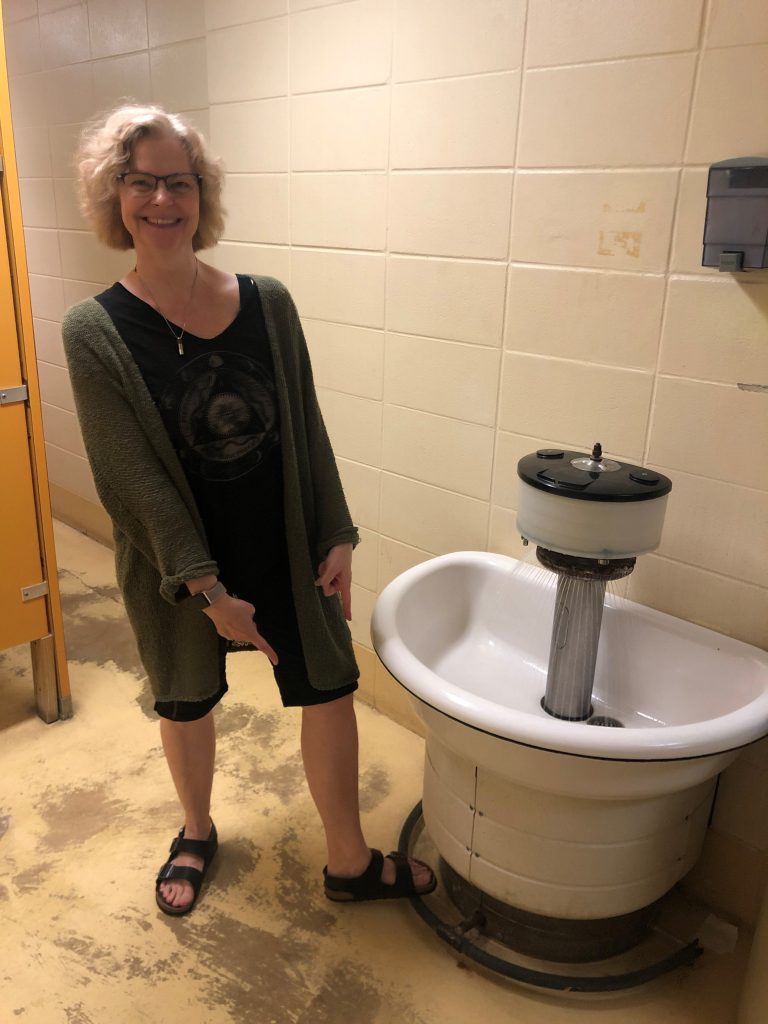 How about those weird bathroom sinks?

I think I can speak for most of us when I state that using a public restroom is typically a solitary affair, especially among strangers. However, those odd sinks in the old Biology Building second floor bathrooms were conversation starters. First time visitors to the ladies room would often try to turn on the water by “breaking a beam” in the large bowl of these sinks, to no avail. As a long-time building resident, I would intervene on their behalf, revealing the foot pedal on the floor that turned on the water. This inevitably led to conversation and comradery on this ridiculous design. However, in consultation with my hubby, I learned the situation was a little more perilous in the men’s room, as he would occasionally intervene with newcomers who thought those weird sinks were urinals!

The Portal of Unproductivity

Dr. Kim Caldwell and I ended up assigned to offices located in the hallway that led to the auditorium. These interior rooms had, in another life, been a single office and adjoining library connected with a door. Kim and I got along really well and found that having a kindred soul in the office on the other side of the door led to many enjoyable, albeit usually non-scientific, conversations. The door was thus dubbed “The Portal of Unproductivity” and could only be opened when neither of us had a pressing deadline!

What is that horrible smell???

One of my former graduate students had collected some raw sewage from the wastewater treatment plant in order to isolate phage. After incubating this sewage for a number of days at human body temperature, he had what he needed and was ready to dispose of the sample. I learned of this plan when a horrible smell started to emanate from the autoclave room on the first floor. After finding the student and learning he had elected to autoclave the remaining sample, we desperately tried to stop the autoclave. Because it was a “liquid” culture, the run could be aborted but the steam and temperature had to be gradually decreased, and so the smell continued to emanate. By this point, everyone on the first floor had left the building to find breathable air. People from the second, third, and fourth floors soon joined them, as the smell continued to make its way up the stairwells and permeate the building. I usually have a pretty strong stomach, but even I was trying not to throw up as I exited the building. That was the last time raw sewage came into my lab! 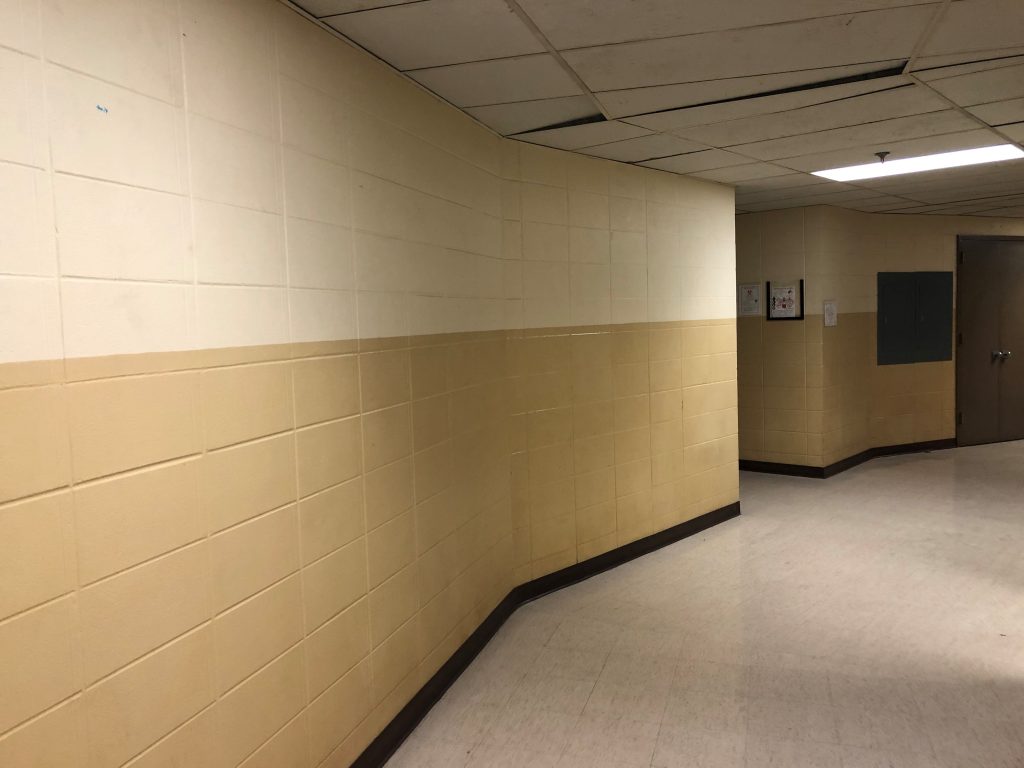 I was working at a microscope in my interior 3rd floor fly lab during the first week of classes one fall semester. As expected, numerous students passed by looking lost. After I noticed that one particular young woman was making her third clockwise trip past my lab, I finally asked her if I could help. Almost in tears, she wailed, “I can’t find the second floor!”

Goodbye to the old Biology Building, whose endless circular hallways made you realize that even the best of scientists can fall into circular reasoning.

Yep, going around in circles in the circular building is memorable alright, as are the countless free pizzas of those times, being the department’s contribution to the welfare of us starving grad students…