Named for Dr. William Darden, professor emeritus and a former chair of UA’s Department of Biological Sciences, the Darden Lecture Series brings prominent biologists to campus to address environmental and humanitarian problems. Mrs. Ilouise Hill of Montgomery established the series to honor Darden, who was on the UA faculty for 31 years.

The 2019 Darden Lecture speaker is Dr. Frans B. M. de Waal. Dr. de Waal is a Dutch/American biologist and primatologist known for his work on the behavior and social intelligence of primates. His first book, Chimpanzee Politics (1982), he compared the schmoozing and scheming of chimpanzees involved in power struggles with that of human politicians. His scientific work has been published in hundreds of technical articles in journals such as Science, Nature, Scientific American, and outlets specialized in animal behavior. His popular books – translated into 20+ languages – have made him one of the world’s most visible primatologists. His latest books are Are We Smart Enough To Know How Smart Animals Are? (Norton, 2016) and “Mama’s Last Hug: Animal Emotions and What They Tell Us about Ourselves,” which was released March of this year and is a New York Times Bestseller. De Waal is C. H. Candler Professor Emeritus at Emory University, in Atlanta, and Distinguished Professor Emeritus at the University of Utrecht. He was selected in 2007 by Time as one of The Worlds’ 100 Most Influential People Today and in 2019 by Prospect Magazine as #4 out of the 50 “world’s top thinkers.”

The talk is at 6:30pm on Nov. 14 in Biology 127, with a reception and book signing immediately after at the Alabama Museum of Natural History (Smith Hall). 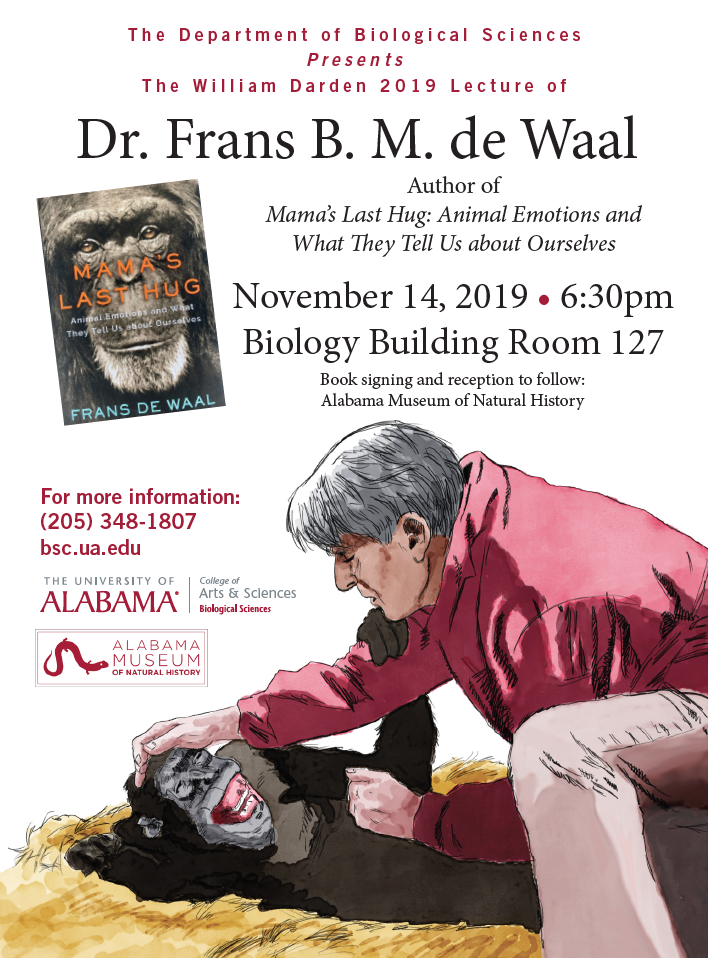