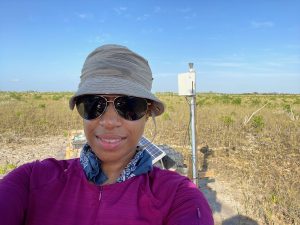 Sparkle L. Malone joined our department as a PhD student in 2011, after receiving a MS degree from the University of Florida’s School of Forest Resources and Conservation.  Building on her skills in ecological modeling, she received her Ph.D. in 2014 with her studies focusing on how changes in hydrology (both natural and anthropogenic) and climate influenced the carbon, water and energy dynamics of freshwater marshes of Everglades National Park (ENP). Her diverse skills and knowledge across ecosystems enabled Dr. Malone to immediately join the U.S. Forest Service as a Research Ecologist at the Rocky Mountain Research Station in Fort Collins, CO. In this position, she developed her own research program looking at disturbance regimes in western forests, while continuing her contributions to the Long-Term Ecological Research (LTER) Program in ENP.  Over the next three years in this position, she received several awards from the Department of Interior in recognition of her research and became involved in mentoring students through the Ecological Society of America’s SEEDS program.

Despite her success at the Forest Service, Sparkle had a desire to return to academia, to a position where she could directly mentor students and young scientists in her lab. Thus, in 2017 she successfully competed for a faculty position at Florida International University (FIU). Since returning to academia, her research portfolio, which was already amazing for an early-career scientist, grew even stronger.  She has received a NASA career grant, which is one of the most prestigious grants a young scientist can attain. She has also been awarded as the principle investigator, co-investigator or senior scientist on another 7 grants.  To date her grantsmanship has exceeded $6.5 million dollars, and she has published 28 articles. She has also served on several national and international research panels and has been a reviewer for over 20 scientific journals. This is an amazing record for such a young scientist and the Department of Biological Sciences is proud of her accomplishments.

When asked about Sparkle, one of her two Ph.D. advisors, Dr. Christina Staudhammer stated, “Sparkle is a force.  She not only accomplishes great research – she picks up skills along the way and is continuously building the infrastructure for new projects along the way. I was so lucky to meet her and have her in my lab.”