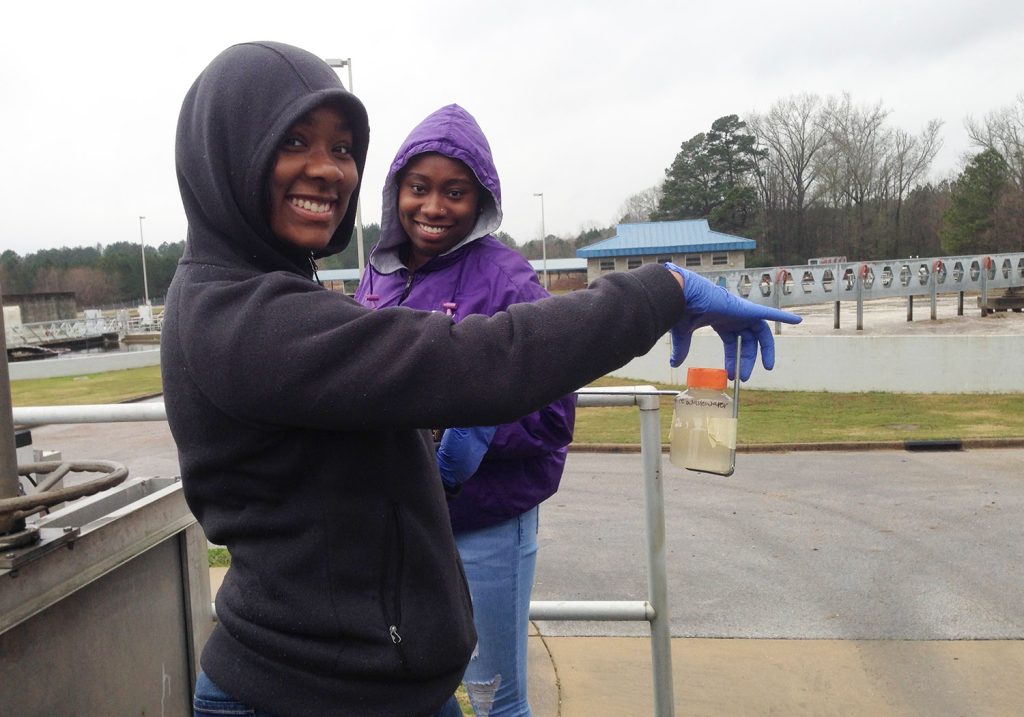 Lab-based course that is part of National Science Foundation CAREER Award
Dr. Asma Hatoum is an Assistant Professor of Biological Sciences at UA. She designed and teaches a new course called Phage Discovery (BSC 411). This past year she won a prestigious NSF CAREER Award for her combined research and teaching efforts, which included the following lab-based class.

What is a phage and why should we care about them? A phage is a virus that specifically infects Bacteria or Archaea. They inject their DNA into the host and hijack its cellular machinery to make many copies of themselves. Many phages end up destroying the host in the process. They are by far the most abundant biological entities on the planet. In fact, it is estimated that there are ten billion times more phage particles on Earth (1031) than there are stars in the observable universe (1021). Phages outnumber their bacterial or archaeal hosts by a factor of ten in every environment tested. Phages are thus the dominant players in shaping microbial ecosystems, including our own microbiomes. Because of their relative simplicity compared to living cells, phages served as the model organisms that helped launch the field of molecular biology, even being a part of the initial experiments that led to the revelation that DNA (not protein) is the source of heritable information. Of the many reasons to care about phages, perhaps the one most relevant to all of us is the promise of developing phage-based therapies to target and eliminate specific bacterial infections, particularly those that are resistant to multiple antibiotics, such as methicillin resistant Staphylococcus aureus (MRSA).

How did the BSC 411 phage discovery class come to be? When I initially came to UA, my research was primarily focused on understanding the class of immune systems known as CRISPR-Cas, which bacteria and archaea use to defend themselves against foreign DNA, including phage DNA. As our research progressed, I naturally became interested in the phages themselves as they coevolve with the CRISPR systems in an evolutionary arms race. My research interests now encompass both sides of the phage-host arms race—the immune system in bacteria and the strategies that phages use to counter them. In BSC 411, we specifically look for phages that infect various strains of Staphylococcus. The results become part of my research effort, and students have an opportunity to earn authorship on the publications that come from their work (see a publication from these efforts here:  https://bit.ly/2D62Duv).  Thus, it is fair to say that this class is very much an authentic research experience.

What do students do in your phage discovery class? As the name suggests, students discover and characterize new phages. We start by collecting samples from a site where we are likely to find phages that specifically infect staphylococci—raw sewage. After bringing the sample back to the lab, the real fun begins. Using a variety of laboratory techniques, we purify the phages, test them to see if they kill pathogenic Staphylococcus species, sequence their genomes and obtain electron micrographs. We do all of this, along with the bioinformatics associated with characterizing the sequences, in the 3-credit hour BSC 411 lab course that meets Tuesdays, Wednesdays and Thursdays over the course of a semester. The skills students learn are invaluable for future careers in medical school, graduate school or industry.