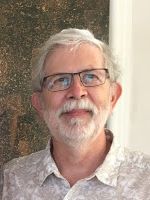 A long-term interest of my lab has been to determine the role of the swallow gene in RNA localization. Females homozygous for swallow mutations fail to localize bicoid mRNA and another anterior mRNA, htsN4.

Several pieces of evidence suggest that the role of the swallow protein is to organize or stabilize the microtubules to which bicoid mRNA is attached, perhaps by anchoring this population of microtubules within the cortical cytoskeleton. We have determined the position of swallow protein by several methods: swallow protein is present at all positions at the oocyte cortex, with enrichment at the anterior oocyte margin during stages when bicoid and htsN4 mRNA localization is most active. Although swallow participates in a ubiquitous and conserved process, cytoskeletal function, in which proteins are typically very well-conserved, the swallow protein itself is extremely variable in sequence among different species of Drosophila, suggesting little selection on much of its sequence. We are currently trying to understand some of the functional and evolutionary constraints by assaying the function of deleted swallow constructs made in vitro.

Drosophila and other higher Diptera are unusual among the insects in having two distinct embryonic organizing centers, an anterior-determining system (bicoid), and a posterior-determining system (nanos et al.). The posterior organizing center is evolutionarily ancient, but the anterior center appears to be a recent evolutionary innovation. Swallow and the remainder of the localization machinery must also be of recent origin, or co-opted from some other purpose(s). We are interested in understanding how the complex mechanism of RNA localization evolved in the Diptera. The swallow gene seems to have evolved at an extremely rapid rate and shows several other interesting evolutionary quirks which we are currently examining.

Stephenson, E.C. 2004. Localization of swallow-green fluorescent protein in Drosophilaoogenesis and implications for the role of swallow in RNA localization. Genesis 39: 280-287.