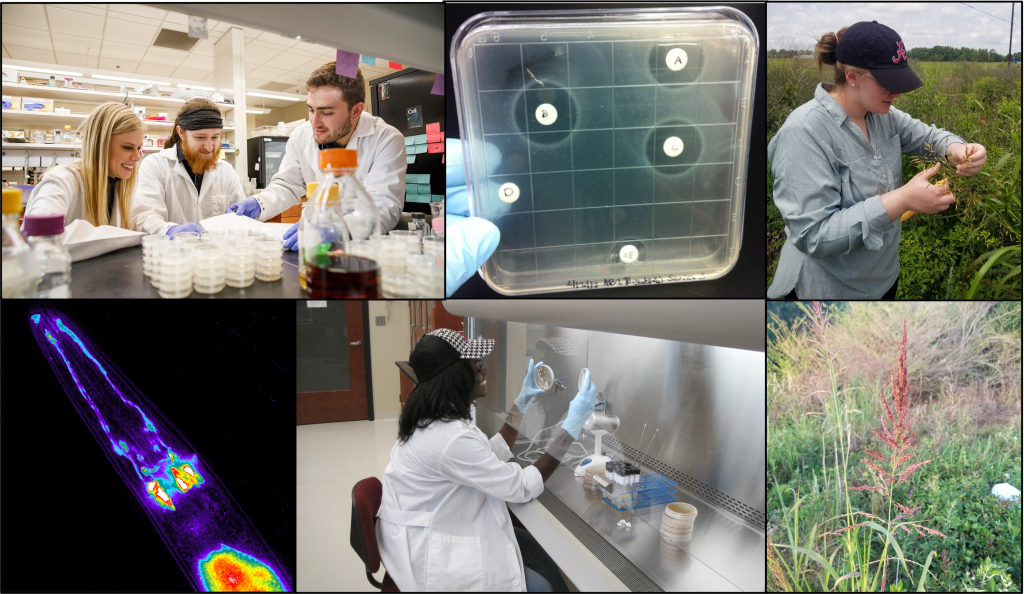 Applications require one reference letter from a professor to be complete. Letters are to be sent to Dr. Julie Olson (jolson@ua.edu) and Dr. Michael McKain (mrmckain@ua.edu) by March 15, 022.

Application review starts on March 16, 2022 and will continue until all positions are filled.

Understanding how genomic and environmental variation are integrated to give rise to complex traits via adaptation is one of the key challenges in biology. Although a wealth of genotypic and phenotypic data regarding how organisms respond under varying environmental conditions is now available, integrating this information into functional and predictive models of evolution continues to be challenging.The focus of this REU site is Re-IMAGiNE Life, Exploring Function through Adaptation. This topic encompasses a wide variety of subdisciplines within biology and creates opportunities for lab and/or field-based, hands-on research by undergraduate students to explore the interplay of genomes, phenotypes, and environments at all levels of biological organization. 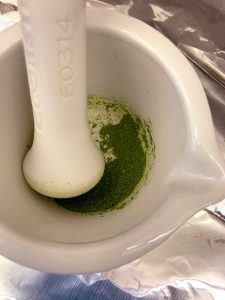 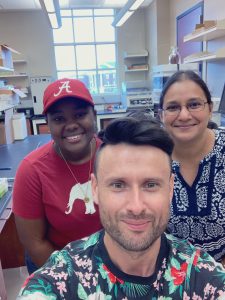 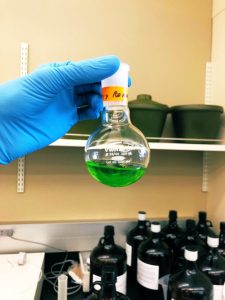 Students who would benefit from this experience

What should students expect?

Freshwater mussels are filter-feeders, so their feeding improves water quality and clarity. However, how mussels may adapt to changes in stream temperature and chemistry as a result of global climate change is not known. The REU student will measure filtration rates in multiple native species in temperature-controlled laboratory trials. In addition, they will assist with an in-stream transplant experiement to examine how growth rates and gut microbial communities respond to varying abiotic conditions. The student will collect mussels from local rivers, tag and measure mussels, grow and maintain algal cultures, perform thermal acclimations and data analyses, and will have the opportunity to interact with local and European collaborators. 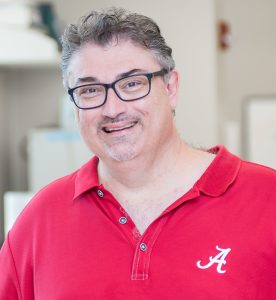 Closely related and even identical individuals exhibit variations in their ability to adapt to genetic and environmental stresses. Resilience to neurodegeneration will be examined in C. elegans, in which we have developed models to investigate factors influencing Parkinson’s and Alzheimer’s disease (PD, AD). Using RNA interference (RNAi), automated tracking of animal behavior, and microscopy, the REU student will conduct quantitative behavioral analysis experiments of specific genes that are modified by epigenetic regulation to discern phenotypes associated with dysfunctional dopamine or glutamate neurons, as associated with models of PD or AD. 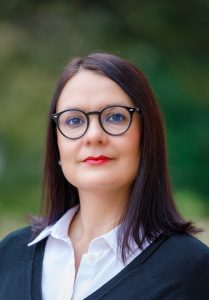 Insects are exposed in their native environment to a myriad of pathogenic microorganisms, including viruses, and mount potent innate immune responses to protect themselves. However, how such adaptations have evolved in the course of insect ontogeny is not well understood. Using the model organism Drosophila melanogaster and a combination of classic genetic and molecular approaches, the REU student will investigate the role of selected candidate genes in age-dependent responses to infection with an insect BSL-1 RNA virus.

Compelling evidence suggests that diet rich in vegetables, fruit and herbs can prevent or delay the onset of numerous chronic diseases. These beneficial effects are often ascribed to plant phytochemicals, which are often produced in response to environmental factors such as drought, UV radiation or pesticides. Using techniques such as high-performance liquid chromatography, high-resolution mass spectrometry, and cryogenic nuclear magnetic resonance imaging, the REU student will evaluate the molecular mechanism of action of phytochemicals and their profiles under varying environmental factors.

The REU student will engage in the scholarship of teaching and learning with a focus on curricular development of functional genomics and/or organismal adaptations in a dynamic environment. Inquiry based lessons/labs will be developed, in conjunction with assessments to be used in undergraduate biology courses that incorporate evidence-based teaching and diversity, equity, and inclusivity practices. Materials will also align with the core concepts and competencies for biology education identified in the AAAS Vision and Change report (2011). 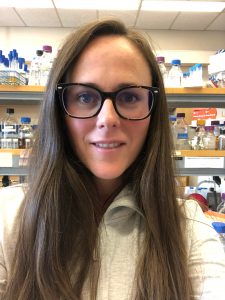 Microbes have evolved many mechanisms to utilize glycans, the most abundant and diverse natural biopolymers, as sources of carbon and energy. Recently, it was discovered that certain gut- and soil-dwelling Actinobacteria have distinct polysaccharide utilization loci likely dedicated to degrading diverse N-glycan structures.  Although these loci share common core genes, they differ in genes that encode for auxiliary glycan degrading enzymes. The REU student will learn and apply in vitro protein biochemistry and structural biology studies of the different auxiliary enzymes to better understand if and how they contribute to distinct N-glycan metabolism profiles between gut- and soil-dwelling bacteria.

As a result of climate change, aquatic organisms are routinely being exposed to warmer temperatures that results in significant cellular stress.  Freshwater unionid mussels are one of the most imperiled group of aquatic organisms and a better understanding of how mussel species respond and adapt to environmental changes will greatly improve conservation and restoration efforts.  To compare the different responses to thermal stress among unionid species with different life-history strategies, the REU student will participate in mesocosm studies this summer in which up to four different unionid species will be exposed to a gradient of thermal challenges over the course of six weeks. During this time, metabolic and physiological measurements will be performed on the mussels. At the completion of the six-week thermal challenge, the REU student will have the opportunity to participate in the collection and analysis of several cellular and molecular biomarkers, including those for energy storage, changes in aerobic versus anaerobic respiration, cellular antioxidant assessment and changes in gene expression. 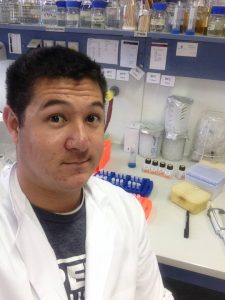 Group B Streptococcus and Neisseria meningitidis are pathogenic bacteria that are able to cross the highly specialized blood-brain barrier and cause bacterial meningitis. To date, little is known about how these pathogens adapted their transcriptomes to interact with the blood-brain barrier. Using RNAseq data from the transcriptomes of both pathogens, the REU student will identify potential targets for gene knockout prior to performing allelic exchange mutagenesis and screening. Cell based assays to test the ability of the mutant(s) to interact with the blood-brain barrier will follow.

Dr. Michael McKain
Impacts of polyploid genome diploidization on the invasive potential of a grass species

Polyploidy is a common phenomenon in flowering plants and has been identified as a potential promotor of invasiveness. After polyploidy, genomes undergo diploidization that includes the loss of duplicated genes, reorganization of chromosomes, changes in expression patterns and other processes. The patterns of diploidization are likely a combination of stochastic and predetermined factors that, when coupled with natural selection, lead to lineage-specific variation. The REU student will use field work, genomics, and computational biology to investigate how diploidization has varied across populations and lineages of the allotetraploid species Sorghum halpenese as it spread across the US.

Many species of bacteria produce secondary metabolites, providing an advantage to the producing organism. However, other than entering stationary phase or exhaustion of a required nutrient, the environmental conditions that induce secondary metabolite formation in these organisms are not well understood. The REU student will investigate the effect of different environmental conditions (e.g., temperature, pH) on the production and diversity of secondary metabolites using a combination of microbiological cultivation methods, bioassays, and molecular genetic techniques.

The ubiquitin proteasome system is responsible for the regulation of critical cellular processes through the selective degradation of proteins. In Arabidopsis, the ATL protein family of ubiquitin E3 ligases, has been shown to play an integral role in plant defense against microbial pathogens. However, the protein targets of these E3 ligases remain largely unidentified. The REU student will perform a screen of an in-house 3X coverage Arabidopsis cDNA bimolecular fluorescence complementation library to identify potential interacting protein partners of ATL family E3 ligases that are involved in plant defense responses. This project will involve the use of microbiological cultivation methods, molecular biological techniques and confocal imaging microscopy.